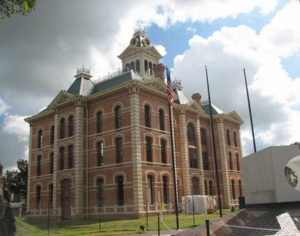 Wharton, the county seat of Wharton County, is on the east bank of the lower Colorado River, forty-five miles from the Gulf of Mexico. It was part of the Caney Run mail route established by the Republic of Texas in 1838. The community was named after two leaders in the struggle for Texas independence, brothers John and William Wharton. The plantation community was first settled in 1846 by some of Stephen F. Austin’s original colonists, and a post office was established in 1847. The first lieutenant governor of Texas, Albert Horton, was an early settler. Early settlers came from Alabama, Kentucky, Virginia, Georgia, and Mississippi. Jewish immigrants, arriving as early as the 1850s, established additional businesses and began the Congregation Shearith Israel, the only synagogue in a three-county area. Other settlers in the community included Swiss, German, Mexican, and Czech immigrants and descendants of plantation slaves. The population of Wharton was about 200 in the early 1880s. The New York, Texas and Mexican Railway was the first railroad to arrive at Wharton in 1881, followed by the Gulf, Colorado and Santa Fe in 1899. These two railroads brought a new influx of settlers, increasing the population to 1,689 in 1900 and 2,346 in 1920. In 1888 the first opera house opened. The city was incorporated in 1902, when most of the structures were of wood construction. A major fire that year destroyed a number of buildings, convincing businessmen and the city government to use brick construction with fire walls for all buildings within the city limits and to construct a water system with fire hydrants. A free library was established in 1902 by the New Century Club and adopted by the city in 1904. In 1935 the majority of this library’s inventory was given to the Wharton Public School. The first public park was dedicated in 1913, and the Wharton Chamber of Commerce organized in 1919. The city experienced its greatest growth during the 1930s, increasing from 2,261 in 1930 to 4,386 in 1940.  In the 1980s Academy Award-winning screenwriter Horton Foote, a descendant of Lieutenant Governor Horton, lived in Wharton.

Proper document destruction is a very important part of doing business today. Not only does the law require proper data destruction, but clients and employees expect that you will safeguard their private information. Many consumers are concerned about identity theft, which has become the fastest growing crime in the U.S. It is also important to businesses that their trade secrets and confidential information are kept private. The consequences of improperly disposing of confidential information could cost your organization a lot of money, time, and embarrassment. Texas Security dedicates itself to keeping you protected by providing on-site shredding for your business or residence, one-time purges, and convenient drop off service.

TSS is committed to helping our clients develop policies and procedures that will safeguard their businesses and customers as well as providing outstanding service and competitive pricing.  TSS is your information security expert. We take our job seriously and are dedicated to providing solutions to our clients by providing:

When you use office shredders, which are slow, unreliable, and inefficient, they are risky because they give the employee complete discretion as to whether a document should be shredded or discarded in the trash. Many business data breaches are the result of such policies. Corporate data breaches are costly in many ways. Here are just a few:

When you pay an employee to shred documents what is done with the waste?  Most likely it is put into the trash.  We recycle all of our waste materials.

For every 1 ton of paper recycled:

Documents you should be shredding

Wondering what kinds of documents should go through the shredder? Here are some examples: