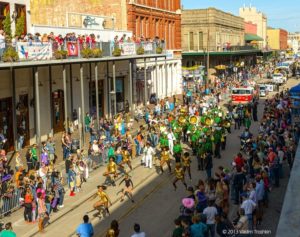 In 1528, when the first Europeans landed, Galveston Island was home to Akokisa and Karankawa Indians who camped, fished and hunted the swampy land and buried their dead here. The Spanish explorer Cabeza de Vaca was shipwrecked on the Island and lived among the Karankawa for several years as a medicine man and slave. In the late 1600’s, French explorer Robert Cavelier La Salle claimed this area for King Louis and named it St. Louis.

Galveston was named for Bernardo de Gálvez, a Spanish colonial governor and general. Gálvez sent Jose de Evia to chart the Gulf of Mexico from the Texas coast to New Orleans, and on July 23, 1786, de Evia charted an area near the mouth of a river and named it Galveston Bay. Later, the island and city took the same name. Bernardo de Gálvez died the same year, never setting foot on his namesake island.

The cultured and debonair privateer Jean Lafitte established the colony of Campeche on Galveston Island in 1817, numbering about 1,000 people at its peak. Lafitte was eventually forced to leave (burning his town behind him), and Galveston as we know it was founded by Michel Menard and Samuel May Williams, among others. The homes of these early island pioneers are still standing.

On September 8, 1900, Galveston was battered by what stands as the most deadly natural disaster to strike this country, known 100 years later as the Great Storm. At the time of the 1900 Storm, Galveston had a population of 37,000 and was the fourth largest city in Texas following Houston, Dallas and San Antonio. One-third of the city was completely destroyed, more than 3,600 buildings. More than 6,000 people were killed – so many, in fact, that the bodies were too numerous for conventional burials. At first, they were weighted and buried at sea; later they washed ashore. From that point on they were burned on funeral pyres all over the city.

Proper document destruction is a very important part of doing business today. Not only does the law require proper data destruction, but clients and employees expect that you will safeguard their private information. Many consumers are concerned about identity theft, which has become the fastest growing crime in the U.S. It is also important to businesses that their trade secrets and confidential information are kept private. The consequences of improperly disposing of confidential information could cost your organization a lot of money, time, and embarrassment. Texas Security dedicates itself to keeping you protected by providing on-site shredding for your business or residence, one-time purges, and convenient drop off service.

TSS is committed to helping our clients develop policies and procedures that will safeguard their businesses and customers as well as providing outstanding service and competitive pricing.  TSS is your information security expert. We take our job seriously and are dedicated to providing solutions to our clients by providing:

Every business collects and maintains sensitive information.  Today, identity theft and information fraud is the fastest growing crime in the U.S.  Many businesses still store paper files, if you are one of those businesses, you may be wondering what to do with those important documents that you no longer need.  The best way to prevent a data breach is to contract with a NAID AAA Certified, on-site shredding vendor. This allows you to have the peace of mind that comes with the ability to observe the entire destruction process. Leaving the decision of whether a document is confidential or not purely to the employee’s discretion carries inherent risks. It is important for your organization to adopt a “shred everything, all the time, in the same manner” policy. Adopting such a policy can minimize your risk of exposure and liability by:

With Texas Security Shredding, your employees can always discard sensitive documents in a safe and secure manner.